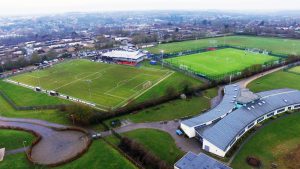 THIS season’s Crown Imperial Youth County Cup Semi-Finals Day will be held at The New Croft in Haverhill.
The twenty Youth Cup Semi-Finals will be staged at the venue on Sunday, March 24th.
Kick-off times will be advised after the completion of the quarter-final ties this weekend, and will be organised with those who have to travel the furthest in mind.
It will be the second time in three years that Haverhill Community Sports Association has hosted the event.
Suffolk FA County Cup Competitions Manager Adrian Moye said: “After speaking with several clubs from across the county about hosting this Festival of Football, I am delighted that the New Croft, home to both Haverhill Rovers FC and Haverhill Borough FC, will once again host the Crown Imperial Youth County Cup Semi Finals Day.
“Peter Betts and his team were instrumental in hosting the inaugural festival in 2017 and thanks to that success the format was brilliantly duplicated last season by Kesgrave Kestrels FC.
“The facilities at Haverhill are exceptional and I know the Youth County Cup Semi Finals will be in capable hands.”
Peter Betts, Facilities & Football Development Manager at Haverhill Community Sports Association, said: “When Adrian contacted me regarding the possibility of hosting the event again, we jumped at the chance as it gives us another opportunity to showcase our fantastic community facilities to different teams from across the county.
“I and my staff at The New Croft feel providing the correct environment for players, coaches and spectators is really important, especially in County Cup semi-finals as we want the experience to be enjoyable for everyone involved.”